Your Hip Family Travel Guide to All The Hotspots Worldwide

I don’t know about you, but I really enjoy exploring ancient ruins from decades ago civilizations.  Infact, my entire tribe does.  It’s fun to imagine what life was like all those years ago while walking through the broken buildings and streets.   As I’ve mentioned in past entries, I also have a mission to seek out the UNESCO world heritage sites throughout the world.  There usually is very good reason that they have been placed in the protective glove and given some much needed TLC.

If you are traveling in Turkey and need some ideas, I can’t recommend enough taking the time to visit one of the most sacred, ancient sites in Turkey originally dedicated to the Mother Goddess dating back to 5,800 BC.  Later in the 1st and 2nd century BC, when it fell into the hands of the Greeks, it became Aphrodisias, dedicated to the love goddess, Aphrodite. Even after the Romans took over the region in 74 BC and discovered this special site, the emperors Sulla and Julius Caesar were devotees and favored her little city. It wasn’t until the middle ages when it was taken over and turned into a Christian basilica. Not only are the remains simply beautiful to see, but walking through them you can still feel the sacred energy floating in the air.  This little gem has just recently been put on the radar.  Infact, as we speak there are archeologists working to uncover and piece this little city back together. 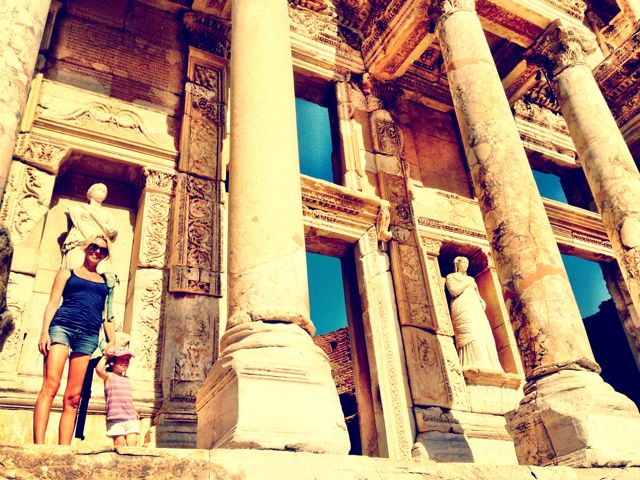 A few hours away from Aphrodisias is the spectacular, magnificent ancient remains of Ephesus.  This old city has roots dating as far back as 6,000 BC.  Over the many hundreds of years after the Greeks and Romans turned this into a massive city, what now remains is one of the largest Roman cities in the Mediterranean.  At one point it housed 250,000 people.  There is so much history and religious background, that this city has been named one of the seven wonders of the ancient world.  What is so astounding is that there is so much to see and yet they have only unearthed 10 % of it.  I assure you that concept is hard to swallow when you see the shear magnitude of the colosseum alone.  This is a must see destination.  But do yourself a favor and try to beat the massive crowds and arrive early, people from all over the world travel to see this spot.